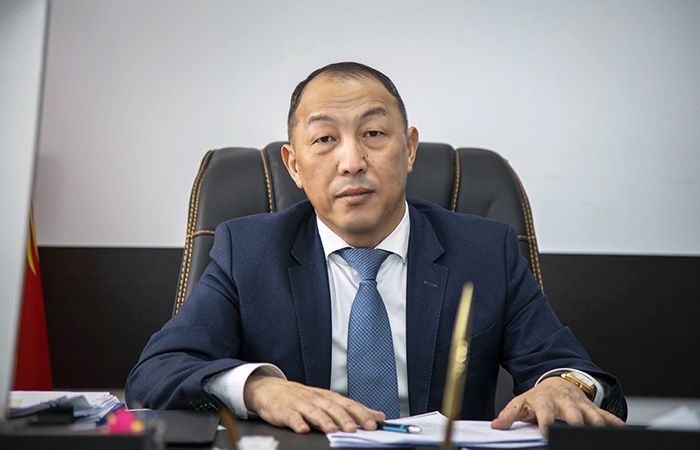 Doskul Bekmurzayev
Photo: Press-office of the Ministry of Energy and Industry of the Kyrgyz Republic

Kyrgyzstan has launched one of its biggest energy projects, Kambarata Hydropower Plant-1, which involved building a rock-fill dam 256 meters high with installed capacity of 1,860 MW and annual output of 5.6 billion kilowatt-hours of electricity. This, combined with the country’s small hydropower plants and solar plants, will help Kyrgyzstan become a major electricity exporter. Energy Minister Doskul Bekmurzayev discussed the projects in an interview with Interfax.

Q.: Construction of the Kambarata HPP-1 got under way in the Jalal-Abad region on June 8. Can you tell us more about the project? What work has begun?

A.: Kambarata HPP-1 will be one of the largest hydroelectric power plants in Central Asia and will guarantee our country’s energy security and independence. It will take between four and eight years to build. The first generating unit should go into service after just four years. Kambarata HPP-1 will be the largest of the entire cascade of Kambarata HPPs, located in the middle reaches of the Naryn River, with capacity of about 1,900 MW and annual electricity output of 5.6 billion kWh.

The reservoir with a volume of 4.65 billion cubic meters will carry out seasonal regulation of the flow of the Naryn River in the interests of energy, compensating for the decrease in winter energy efficiency of the Lower Naryn HPP cascade - Toktogul, Kurpsai, Tashkumir, Shamaldysai, and Uchkurgan HPPs.

Therefore, an important advantage of the Kambarata HPP-1 will be non-exposure to winter restrictions, since the water from the plant will build up in the Toktogul reservoir. In addition, with the full launch of the Kambata-1 HPP, conditions will be created for the operation of the Kambarata HPP-2 at full capacity, starting to use the second and third units, which subsequently increases its capacity.

Preparatory work began two months before the project’s launch. Now the bridge and substations are being designed.

Q.: Kazakhstan and Uzbekistan have shown an interest in building the HPP. Have their equity stakes been decided?

I want to say that we will complete the plant with or without our neighbors. We have the blueprints, the calculations. Further information will be provided at the end of the negotiations.

Q.: Is the participation of Russian companies under consideration?

A.: If Russia wants to participate, you are welcome. But this should not be like in other projects, when interest is declared without further activity. We respect Russian colleagues and specialists and would be happy if Russia joined the project.

At the same time, we are not relying on anyone, but only on ourselves, and we are confident that we will be able to complete it on our own.

Q.: A consortium of SNC-Lavalin International Inc. and South Engineering Energy Center drafted the most recent feasibility study for the Kambarata HPP. Costs were estimated at $2.9 billion in 2014. Will that study be updated or will a new one be needed?

A.: There’s no need for a new feasibility study, it will be enough to update the old one to reflect the new conditions and market situation. A company, CJSC Kambarata-1, has been set up, there are assets, and the land has been allocated. Over this period a lot of inputs have gone up in price, but there will be no significant increase in the cost of the project. We should manage $3 billion unless the type of the dam is not changed. If we build a concrete dam, the cost will be much higher

Q.: Have sources of funding already been identified?

A.: The HPP construction period is 10 years. It is impossible to get through $3 billion in one year. If we divide the total amount by the construction period, then $300 million will be needed annually. First, we must use the funds that have already been provided. Currently, $20 million has been allocated from the budget. Another $500 million has been allocated for subsequent stages. Kyrgyzstan does not need to ask now, we can build the plant ourselves, and if investors are interested, then we are ready to consider their proposals.

Q.: The construction of the Kambarata HPP was a stumbling block with Uzbekistan until recently. Have you been able to resolve the differences?

A.: Uzbekistan has no objections to this project and should not have any. Kambarata-1 is located upstream of the Naryn River, while downstream there is the cascade of Toktogul hydroelectric power stations. If it was located downstream, then there might be an issue. The Kambarata HPP-1 will have annual water regulation, so this will only have a positive effect on the Toktogul HPP, which has a multi-year water regulation. So there is no issue at all during the crop season. First of all, Kazakhstan and Uzbekistan will receive more benefits, there will be no problems with water.

Interdependence is not a vice. There will always be mutual market relations. When we have a surplus of electricity, we have to sell it to our neighbors at affordable prices. In the event of a shortage, our neighbors come to the rescue.

Q.: Kyrgyzstan has imported electricity from Kazakhstan, Uzbekistan, and Turkmenistan in recent years. Is the forecast for the coming year ready, will there be an exchange?

A.: According to the 2023 forecast we plan to stop importing electricity altogether. If there’s not enough then we can negotiate with the neighbors. Kazakhstan, Uzbekistan, and Turkmenistan have been sympathetic when we have had difficult periods. These issues were resolved between ministries. There are no cornerstone issues right now.

The Toktogul reservoir will have 13.5 bcm of water by October 1, according to the most pessimistic estimates. Without imports we’re looking at 7.1 bcm as of April 1, 2023 and with imports around 10 bcm. That's enough for the energy system to work smoothly.

The Energy Ministry’s long-term task is generation and tapping the Chinese market. In a few years, we will have a surplus of electricity, and we will have to sell it. Given their knowledge of the market situation in Central Asia, Kazakhstan and Uzbekistan understand that when the water level in the Toktogul reservoir increases we have an excess of electricity, then they can dump and drop the price, so we want to enter the Chinese market. We must look for new markets. The payback period for Kambarata-1 is from 12 to 15 years. If we sell electricity to China, the payback period could drop to eight years.

Q.: CASA-1000 is another major project for electricity exports. What stage is its implementation at? Will the situation in Afghanistan affect its completion?

A.: The CASA-1000 project is seeing costs increase by $37 million due to the fact that power lines had to be moved, as Red List plants were found along their route. The cost increase is included in the contract.

We are ahead of the curve. Next year we will complete it on our territory. I cannot speak for Tajikistan, Pakistan, and Afghanistan. There are no obstacles on our part, funds are being allocated on time.

Q.: The Hong Kong International Arbitration Center on July 18 ruled that Kyrgyzstan must compensate Russia’s RusHydro for $37 million invested in the Upper Naryn cascade of hydropower plants. Is this project frozen or will construction continue after the final settlement of the issue with the Russian side?

A.: The Upper Naryn Cascade is a very appealing project. To date, 12 countries have shown interest in it, including private Russian companies. Turkish, Arab, Chinese, European investors are interested in the project. I don't think it will get frozen. We are open to investors from all over the world.

Q.: Kyrgyzstan and Rosatom have agreed to collaborate on the construction of a low-capacity nuclear power plant. Has there been any progress with this?

A.: We are ready to develop in any area, but Kyrgyzstan's priority is hydropower. A memorandum has been signed with Rosatom and we are working in this direction. This is not a project for a single day, negotiations are underway.