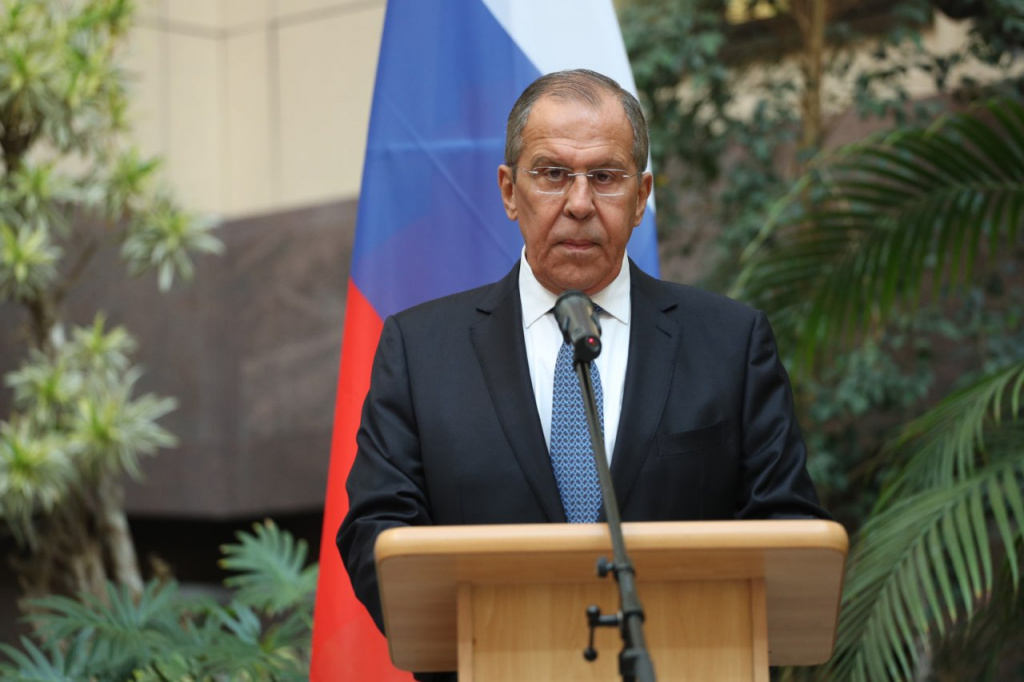 Sergei Lavrov
Photo: The Ministry of Foreign Affairs of the Russian Federation

Russian Foreign Minister Sergei Lavrov has given an interview to Interfax, in which he commented on leaks in Western media regarding a German-U.S. agreement on the Nord Stream 2 project. He also said that Russia does not plan to deploy its troops in Afghanistan and deliver pinpoint strikes on terrorists there. He also denied reports that Moscow is ready to provide its bases to the United States after it pulls its troops out of Afghanistan.

Question: A draft agreement between Germany and the United States on the Nord Stream 2 gas pipeline ties Ukraine's energy security to new sanctions against Russia that Germany may impose. How acceptable is the threat of new sanctions in Russia's view? Could this eventually impact the project's implementation?

Answer: Any threat of sanctions, be it a new, an old, or a current one, cannot be viewed as acceptable, because only the UN Security Council can impose them. Our Western colleagues, primarily the United States and the European Union, which is actively taking these 'bad habits,' are fond of sanctions all over the place. They don't care anymore about the culture of diplomacy, of negotiations. In fact, they are losing it. They want an immediate result.

One certain example is the incident in the skies over Belarus involving the Ryanair flight. Sanctions were already announced. The investigation in which Belarus was invited to take part long ago is carried out within the framework of the International Civil Aviation Organization in Montreal and will end only in September. At the same time, demanding regularly and publicly a fair investigation, the Western countries have already imposed sanctions. They are treating other situations, including those involving Russia, in a similar manner.

As to this certain case you mentioned - the results of the U.S.-German negotiations on Nord Stream 2. I heard the negotiations are allegedly over. I'd prefer to wait for an official announcement. They're threatening to make it today. But from what has leaked to the media, what is striking, if it's true, is an agreement that Germany would commit to ensure the transport of Russian gas [across] Ukraine after 2024. Germany must be so powerful... Let's see how this is eventually formalized.

We were absolutely not surprised by the second part of these rumors (whose official version, I'll repeat, we have yet to see), that if something, if Russia 'behaves badly' in regard to Nord Stream 2, Germany and the European Union will definitely 'punish' the Russian Federation. If everything is really so, then this is sad. But let's wait for the results. These are just my presumptions for the time being.

Q.: Does Russia rule out the permanent deployment of Russian military in Afghanistan given the instability and the growing terrorist threat there, or do we consider an option on delivering pinpoint strikes on terrorists?

A.: We have answered these questions long ago. We have obligations to our allies, Tajikistan and Kyrgyzstan, which we follow in line with the relevant Collective Security Treaty article. In case of any aggression against any of the CSTO members, consultations shall be held immediately to determine countermeasures to suppress this aggression.

Nobody is talking about any pinpoint strikes upon Afghanistan's territory, and nobody is even thinking of any invasion of Afghanistan. You're getting us confused with the Americans or with the experience we've carried over from Soviet times. Our society has formed a firm opinion that the country must ensure security of its borders and provide conditions for all other countries to maintain their security through their internal agreements in line with their national ideology.

Q.: How trustworthy is the media leak that Russia allegedly offered the United States to use Russian military bases in Kyrgyzstan and Tajikistan?

A.: How can we invite the Americans to the bases that are part of the Collective Security Treaty Organization's Collective Rapid Reaction Forces? Unlike the example of one country deciding for 28, which we've just discussed, we behave in accordance with our obligations. We can't invite anyone to a base that is part of the CSTO forces unknown to our allies. Within the framework of our continued contacts on Afghanistan in the formats of the Russia-China-U.S. Troika, or the extended Troika involving Pakistan, or in other formats, [Moscow] is willing to help calm the situation down and exchange intelligence on the real developments on the ground in Afghanistan.

Intelligence that we obtain through our bases is also available to our allies, and they are directly involved in the negotiating processes. This information could be of use to all those who really wish to help reconciliation on the ground. Nobody has achieved such reconciliation yet. The political negotiations actively sponsored by the Americans haven't produced a result. As far as I understand, they'll be continued. This is good in itself. We will cooperate, and we will exchange intelligence, but nothing more than that.

Q.: Will information be exchanged as part of some kind of a mechanism?

A.: Although there is such an option, no one discussed this topic from the practical viewpoint.

Q.: The incident involving HMS Defender in the Black Sea. It seemed that it was a single case, but then the Sea Breeze exercise took place during which the West seemed to test Russia's defense capabilities. Does Russia think that this is some kind of a long-term irritant, or could this issue be settled? If yes, then how - diplomatically or only by force?

A.: Given the 'medical records' of our Western colleagues, especially British ones, this probably is the long-term syndrome of losing or longing for former greatness. 'The mistress of the sea' suddenly wasn't allowed to pass where it decided for itself to pass. Regretfully, these attempts to test our strength will stay for the long-haul. But I think that our colleagues will swiftly understand how this could end.

UK Foreign Secretary Dominic Raab said after this ugly instance of breaching international law that the United Kingdom will "continue to assert its right to freedom of navigation in international waters". This is, first of all, illiterate. The freedom of navigation when it comes to a territorial sea - in this case Russia's territorial sea - is considerably restricted. We have made statements to this end, I wouldn't repeat them. Secondly, Crimea is only part of their ambitions. Our NATO colleagues, including Britain, took the course at projecting their unlawful and rather insolent actions in international waters, including in the South China Sea. The 'guys' who took part in the Sea Breeze exercise, those who tried to 'show-off muscles' to Russia's Crimea later announced that they were heading for similar maneuvers in the South China Sea.

Coming back to the Crimean affairs, I think it is illustrative how fast the destroyer retreated. All the wailing that they had no hidden agenda but 'to protect the purity of international law' are not worth a penny, they were refuted by 'a bus stop' - similar to the style of either Agatha Christie or Conan Doyle - [where] secret documents of the British Naval Service were found. Perhaps, such things happen by thoughtlessness or simply by negligence. This instance, this discovery dispelled any allegations that no provocation was planned. It was indeed planned and a big one! There are a million proofs, a journalist aboard [the ship] and many others.

Q.: Some time ago you said that U.S. President Donald Trump played an important and constructive role in achieving the agreement on oil market stabilization. You assessed his actions, the actions of three leaders - of Russia, Saudi Arabia and the U.S. - as an example of outstanding cooperation. Trump was one of the drivers of this agreement. Was this topic discussed at the Putin-Biden meeting?

A.: This wasn't discussed at the summit. I won't make any comparisons. Each president has negotiating partners in each particular historical period. The theme of negotiations emerges depending on what exactly the subject of common interests is right now. Such common interest shared by the U.S., Russia, Saudi Arabia, and other members of the organization of oil producers was obvious. Now the oil markets are feeling quite well.