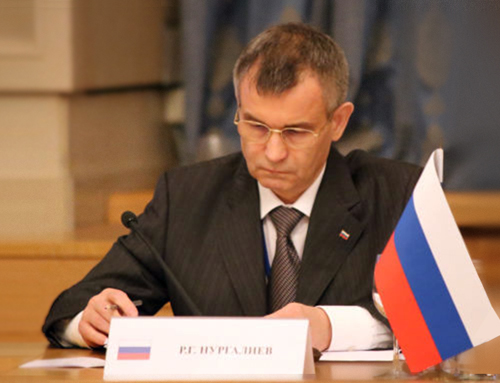 Russia holds the Collective Security Treaty Organization (CSTO) presidency in 2020. The organization currently comprises Armenia, Belarus, Kazakhstan, Kyrgyzstan, Russia and Tajikistan. The key provision of the Collective Security Treaty is the possibility to collectively defend the CSTO member states if one of them falls victim to aggression. Russian Security Council Deputy Secretary Rashid Nurgaliyev has given an interview to Interfax in which he speaks about cooperation within the CSTO framework, interaction of the organization's member states amid the coronavirus pandemic and prospects for the CSTO development.

Question: Russia has the CSTO presidency this year. How would you assess integration within the CSTO at the level of security councils?

Answer: The Security Councils of the CSTO member states constantly cooperate both bilaterally and multilaterally on countering security challenges and threats. We jointly combat terrorism and extremism, illegal drug sales, and illegal migration. We also interact in the sphere of information security. Military and military-technical cooperation has been strengthening.

Q.: Do the Security Councils of the CSTO members cooperate in countering biological threats, in particular the coronavirus?

A.: The coronavirus pandemic has brought our countries and their Security Councils even closer in the fight against current threats.

Regular interaction has been arranged by telephone and through telecommunications between specialized organizations, such as sanitary-epidemiological and medical services, immigration institutions, and air transport and tourism regulators, and some issues have been addressed at the level of emergency situations and defense ministries.

Russia provides humanitarian aid to its partners. In particular it supplies Covid-19 test kits. Mobile laboratories and test systems have been shipped to the Republic of Armenia to examine the personnel of the Armenian Armed Forces and the 102nd Russian Military Base.

As part of efforts to improve the collective security system, taking into account a new type of threat, we are willing to invite our allies to consider including medical units and radiological, chemical, and biological protection units in the CSTO special forces and resources.

Q.: Do you think that the military component of the CSTO has to be bolstered amid growing military-political instability in the world and regions adjacent to the CSTO’s area of responsibility?

A.: As you have noted correctly, the military-political situation in the world and in the regions bordering the CSTO area of responsibility remains unstable and is tending toward further escalation.

In these conditions, the forces set up within the CSTO today have enough potential to address the set tasks. At the same time, special attention will be given in the future to equipping them with modern weapons and military hardware, as well as command and communications systems. All these issues are reflected in the CSTO military cooperation development plan for the coming five years. The CSTO will continue holding military exercises to develop new forms and methods of using the collective forces, which will boost the effectiveness of the tasks set for CSTO groups of troops.

Q.: Can the CSTO take part in peacekeeping operations under the UN auspices? If yes, are there CSTO peacekeepers in any trouble spots?

For the purposes of practical interaction with the UN Department of Peace Operations, the CSTO plans to invite its representatives as observers to the Unbreakable Brotherhood 2020 command post exercise involving CSTO peacekeeping forces to be held in Belarus.

Q.: Does the CSTO interact with other international organization besides the UN?

A.: The CSTO Charter prescribes interaction with other international organizations. Naturally, the UN plays a central, coordinating role and therefore serves as the key partner of the CSTO. This interaction rests upon a solid foundation of laws and agreements and embraces every major area of the deterrence of modern threats and challenges.

The CSTO has also been actively cooperating with the Commonwealth of Independent States, the Shanghai Cooperation Organization, and the Organization for Security and Co-operation in Europe. An example of this is the participation of OSCE observers in the “Channel” annual regional anti-narcotics operation in the CSTO.

The CSTO is ready for close interaction with all interested international and regional organizations operating in the field of security and views NATO as one such influential organization.

Q.: When speaking about threats to CSTO countries we usually mean the terrorist threat from Afghanistan. What is the situation in the Tajik-Afghan border zone?

A.: It's no secret that serious losses have been inflicted on the terrorist organization ISIL (banned in Russia); most of Syria was liberated from militants, and the terrorists' command system and infrastructure were destroyed after resolute actions by the Syrian government, with support and assistance from Russia. However, terrorists have become active in northern Afghanistan; they are hatching plans to infiltrate the neighboring states of Central Asia.

As a result, the importance of the Tajik-Afghan section of the external border of the CSTO states as an anti-terrorist buffer has grown. Extra political and military measures are being taken to stabilize the situation, and interaction between regional and international organizations is being improved. Military infrastructure is being created on the territory of the Republic of Tajikistan, new methods for fighting terrorism, drug trafficking, and illegal immigration are being used, and work on a draft version of the CSTO target interstate program to strengthen parts of the Tajik-Afghan border is being completed.

Q.: It is common knowledge that citizens of Russia, Tajikistan, and other CSTO member states fight among the ranks of terrorists in Afghanistan, Syria, and other countries. How can mercenaries be countered? Is it possible to thwart the activities of those who recruit them in our countries?

A.: This issue has long been in the CSTO spotlight. For example, the “Mercenary” special operation, held in the CSTO format, is aimed at blocking recruitment channels, at entry and exit for people who might take part in terrorist activities, and at neutralizing the resource base of international terrorist organizations in the CSTO space.

Some 100 people involved in terrorist activities were detained last year in an international operation conducted under the aegis of the CSTO, more than 250,000 people were checked and 61 people were placed on the international wanted list. We consider it feasible to continue such operation in the future.

Compiling a common CSTO list of terrorist organizations is still on the agenda. We hope that our partners from Armenia and Belarus will speed up the changes to their national legislations that are necessary for this.

Q.: Illegal migration undermines the national security of any state in any part of the world. It leads to an increase in crimes, negative trends on the labor market and upheavals in society. How are the CSTO member states protected from this phenomenon?

A.: The CSTO is conducting the “Illegal” operation. Its task is to isolate from the huge number of episodes connected to the powerful migration flows in Eurasia those that that aim to breach the law, carry out criminal schemes and profit from traditionally close and diverse ties that post-Soviet countries still have.

A number of illegal immigration routes from South and Southeast Asia to EU countries via CSTO member states were shut down last year, and more than 159,000 violations of migration laws were prevented; in particular, foreign citizens who illegally stayed in the territory of CSTO member states for a long time were tracked down.

Operation “Illegal 2019” led to the detention of over 1,000 wanted individuals, and more than 8,000 foreign citizens were expelled or deported from CSTO member statesadministratively. Law enforcement agencies of Kazakhstan, Kyrgyzstan and Russia opened almost 7,000 criminal cases oncharges of organizing illegal migration.

Financial monitoring agencies of Belarus and Russia detected over 2,000 suspicions financial transactions conducted by foreign citizens. An important result of interaction between our countries in the field of immigration is the fact that fewer attempts are being made by illegal immigrants from third countries to use the CSTO space as a transit route to countries of the European Union.